737: 24 Electrical power » Not possible to start APU on battery power

Some occasions have been reported of an unwilling APU. Starting the APU caused the indicator lights to flicker but the
APU did not start up. The APU generated a ‘FAULT’ light and the conclusion could be drawn that the APU is at fault, but
that does not necessarily has to be the case. In most situations an APU is started using an external electrical power source, but also a battery start is possible. However,if the APU does not want to start on battery power, specific
behaviour may trigger you about the possible cause. If the APU is started without external power and one or more of the following
situations occurs:
– indicator lights go on and off,
– a rattling noise is heard behind the CB-panel of the F/O
nearby the Standby Power Control Unit (SPCU),
– fuel valve spar light flickering from bright to dim,
– APU ‘FAULT’ indication light illuminates,
…then, there is a vast chance there is not enough battery
power to start the APU.

Although not documented, in such situations it is recommended first to perform tests of the Main- and Auxiliary Battery Chargers,
AMM task: 24-31-21-710-801 and task: 24-31-31-710-801. For more than one reason it is important to do these tests. Just checking
the battery indication on the P5-13 panel is not sufficient to find a bad battery. The Main/Auxiliary Battery Charger test can give
a better indication if the battery is a possible cause, but will not guarantee the capacity is in order. 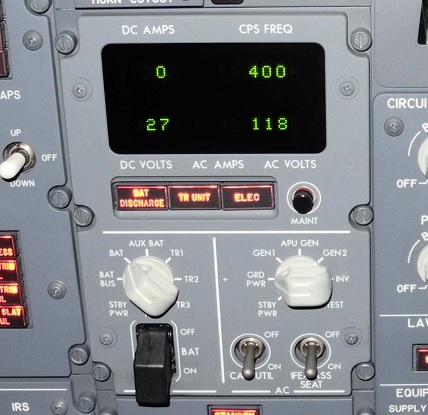