General information » A guide to be a more valuable technician

This story is to share my opinion or definition of a good and valuable technician for your airline.

Many times i see co-workers declaring parts unserviceable during a C check or A check or on the line during a preflight or overnight inspection. Closer examination revelaes many times these parts are declared unserviceable while they are not. Often the person declares it unserviceable because he thinks it is not ok, or he assumes it must look as new. You see this often with persons who worked before in the Air Force or government related aviation industry or an aircraft factory. They are used to have almost 100% new looking a/c, they where used to have time enough and money was never a problem. There was no commercial pressure and not any reason why you should not replace a part that looks a bit worn.

But also in commercial aviation many technicians have the same behaviour. They declare many parts u/s, they ground many planes and they cause many delays just because they where not experienced, informed, supported or are uncertain about their decisions. And as long it is accepted by any manager or company proces, and not halted by any technical representative, these persons may cost your company more than they are worth for the company.

This is a big issue, or grey area. If you find something not 100 % new, but you also cannot find any limits….
It depends on what and when you find someting.

-What is the purpose of the part and what does it do?
But most important:
-Do you have to inspect it on that moment? Most probably not.

You do not do a thorough detailed inspection of the landing gear during a turnaround, do you? no
You do not do an aileron tab freeplay check during a daily check. No.
You do not test the complete a/p system, stby hydraulics and autoslat system during a nightstop? no
Do you inspect all flaps bulb seals every day? no. Landing gear wheel well seals ? no.
Wheel well rubber blade seals? no, this inspection is called up every A check or 90 days only !

There could be something wrong in those systems, but you cannot find that every day. It is not supposed to be find every day, because then you can close your airline and go bankrupt.
The maintenance program is designed that way that safe flight can be maintained even with worn parts, half worn parts and systems that do not work. If you have to inspect certain parts during certain moments, THEN you can declare it unserviceable, and there is enough time to intercept dangerous situations.

Example: Corrosion on a toilet-housing attachment point. You have to look at that point only once every 2 years ! It happened that someone found some grey powder near the toilet floor and declared the a/c unserviceable ! During a nightstop. It was the toilet-attachment. Common sense? No of course not. The toilet will not break off within 2 years.

Example: Freeplay check on the elevator. Only done every 2 years or C check. You find some play just within limits, it is OK. The aircraft can fly again for 2 years. These limits are there not for nothing. If the play grows outside the limits within the next 2 years, NO PROBLEM. It will be found during the next C check. Thats the way the limits are desinged and determined by Boeing.

So only look at those parts that you are supposed to look according the maintenance program. So during a preflight check, when there is no OBVIOUS damage or leaks, all is ok.
Example: Do not go into the E&E comp and look for floor-structure cracks during a nightstop just because you know they are there. These cracks will be found during a C check. Thats the way the maintenance program is designed.

Example: Flap track of the aft flaps: Some coating on the roller-track surface is missing and a coworker declared all tracks u/s. Without looking or measuring for limits. Result, a 28.000 dollar bill for tracks that where only at 10% of their worn-limit !

I always say (almost every day!): Everybody can declare a part unserviceable, even my neighbour or uncle. It’s that easy to declare someting unserviceable just because you do not know. Its the easiest way out ! I can go to the line,and check every aircraft and i will find something on every aircraft in our fleet and i can ground the whole fleet ! Its that easy! Thats not the reason i get paid for.

You are paid to use your common sense and good interpretation of damage and condition of parts to declare it serviceable or not. A good technician knows what he does and declares a part or a/c serviceable first and knows when to ground an aircraft, taking in consideration the safety of flight together with the available documents, manuals, limits and parts/tools he can use.
You must stick to the maintenance program and look at parts and areas when it is asked for to look at on that moment. Unless OBVIOUS signals say otherwise. 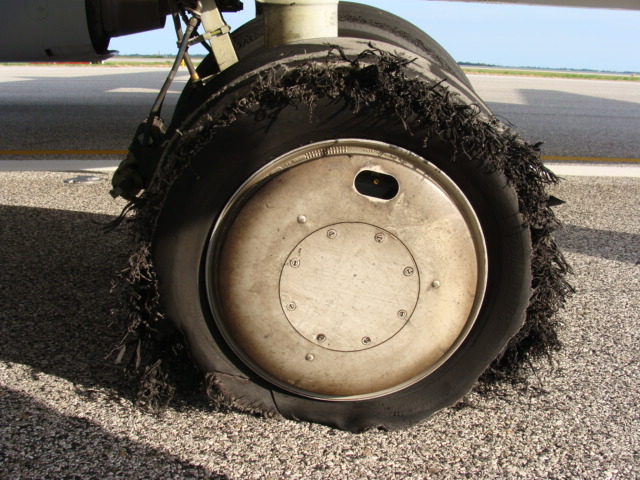